Vintage Stock Car Racing’s “Iron Man” no not that one ••• this is a real one!  In case you’re wondering about the history of how Vintage stock car racing started “The Iron Man” Gene Felton was one of the founders, he’s inspired many racers over his career and still is today, this is his story.

Ingram’s Flat Spot On Iron Man Felton Returns by Jonathan Ingram Sometimes the kid who can only dream of being a racer becomes a racer. And the rest is history. Gene Felton at a 2001 Road Atlanta Vintage event in his Pontiac Grand …

Sometimes the kid who can only dream of being a racer becomes a racer. And the rest is history. 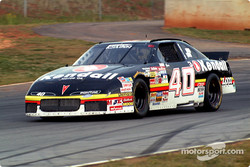 For Gene Felton, who will be one of the special guests to help Road Atlanta celebrate its 40th anniversary this weekend at the Petit Le Mans, it all started as a boy. He would sneak into the Lakewood Speedway to see the stars of NASCAR wheel-twisting their American iron at breakneck speeds on the mile oval that circled Atlanta’s old reservoir. “I used to walk in through a storm sewer pipe that was near the entrance on Pryor Road,” said Felton of his visits to the dirt track in the 1950’s to watch the likes of Junior Johnson, Lee Petty and Curtis Turner.

By time Felton was finished with his professional career, no driver had won more major races or more consecutive championships while driving American cars on U.S. road circuits than the man from Atlanta.

Nothing, it seemed, would ever come between Felton and racing. While serving in the Marines, Felton started his racing career on motorcycles in Okinawa. Once back in the states, Felton taught himself to race cars while delivering beauty supplies on the curvy roads in the north Georgia mountains aboard a Mustang.

To race on weekends, Felton first jumped into his wife’s BMW, a 60-horsepower “grocery getter,” then took up A Sedan racing in the SCCA aboard a Mustang. He also joined the swarm of stock car racers at the Peach Bowl’s flat quarter-mile bullring, which had taken over from Lakewood as Atlanta’s home for heavy metal action. He won a championship at the track in the city’s old stockyards, but it was road racing where Felton finally found his niche.

A hallmark of speed and consistency, Felton scored 46 career victories in the International Motor Sports Association from 132 starts. Even more impressive were his qualifying statistics. He started from the class pole 73 times in IMSA’s professional categories, or 55 percent of his races. Counting qualifying and race laps, Felton set 63 track records during competition on the high-speed courses like Daytona, Sebring and Road Atlanta, among many others.

Easy going off the track, the fiercely competitive Felton personified one of the most unique eras of American racing. He vaulted to stardom during a time when hard-working individuals built their own cars in their own shops. This required something more than a little ingenuity. To check out his motor and transmission combinations in his Mustang, for example, Felton would ease over late in the evening in his race car to one of the long hills in what was then the sparsely populated suburbs outside the I-285 Interstate that circled Atlanta. He would do an impromptu hillclimb on the county roads to see how the engine pulled. On weekends, he joined the others who climbed on board at the race track to prove who had the fastest machine. 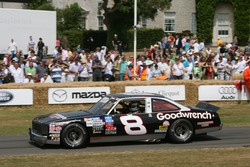 These days, Felton is an often special guest at the most famous hill climb of them all at Goodwood in England, where he showcases some of the historic NASCAR vehicles he owns such as the Nova once driven by Dale Earnhardt Sr. in Late Model Sportsman events.

Unfortunately, many of the cars Felton competed in himself are no longer available. The Mustang was crashed beyond recognition in 1967 at the SCCA Road Race of Champions (the Runoffs) at Daytona in 1967. “Somebody blew a tire and came back across the track and took me out and Peter Gregg, who was driving a Porsche in B Sedan,” said Felton. Due to the twice weekly shows at the Peach Bowl, located in the city’s old stock yards, Felton switched to ovals, and then naturally transitioned into NASCAR’s old Grand American series for pony cars, which competed on a variety of circuits.

In 1971, Felton started last at Road Atlanta in a Camaro re-built from a heavy crash (by another driver) at Dover. The car owner, it seems, owed Felton some money and loaned him the wrecked Camaro so Gene could race it to collect the debt. “That car was b-a-d bad,” said Felton of the junked heap which he put back together in his own shop. “When we got to the track we didn’t have a rear gear so we couldn’t qualify and started in the back,” continued Felton. “Tiny Lund loaned us a rear gear for the race. I knew the track and was determined to get my money back. I finished second behind Tiny and ahead of Bobby Allison in the second of two races and collected $700.”

When IMSA’s fledgling Camel GT made allowances for American muscle cars, Felton created a purpose-built Camaro for road racing, then nearly destroyed it in the rain at Mid-Ohio. Next, Felton took the road racing world by storm in November of 1972 when he scored a 250-mile Camel GT victory on the original ultra-high-speed oval and infield road course at Daytona. This was back when things on the road courses were wild and wooly as IMSA founder John Bishop tried to jump-start his sanctioning body with a rulebook that welcomed all and rewarded inventiveness.

But it took more than a tinkerer’s knowledge to get through Turn Three on the Daytona oval with the throttle wide open. This was before the organizers began using the motorcycle chicane for the sports cars and, well, after whistling down the 3,000-foot backstretch they went through the 31-degree banking just like them NASCAR boys.

Piloting his home-built Camaro, one of those muscle-bound versions where the rear tires were so wide they looked like a couple of barrels that had been turned sideways, Felton blew away a field of factory-backed big block Corvettes and a Porsche brigade that included the Carreras of Gregg and Hurley Haywood. “I guess we didn’t know we couldn’t win that race,” said Felton. He came back the following July to play the part of Paul Revere in the night race that preceded Daytona’s Firecracker 400, winning IMSA’s 250-mile sprint again.

Before his road racing hit high gear, Felton took the time to make his debut in NASCAR’s premier Winston Cup series at age 40 by driving the Truxmore Ford entered by Junie Donlavey to 16th place in the Dixie 500 at the Atlanta Motor Speedway.

Next, Felton put all his experience to good use on the road courses in IMSA’s Kelly American Challenge Series. From 1977-80, he collected four straight championships, a record for consecutive titles in IMSA that stood for 11 years until tied by Geoff Brabham. The Georgia driver swept nine straight races from the pole aboard a Chevy Nova in the final year of the streak. The following season, he became one of the first drivers to win under power from GM’s history-making V-6 race engines. Felton eventually racked up 25 career American Challenge victories behind the wheel of Buick Skyhawks, Novas and Camaros, all built and prepared in Atlanta by the driver plus a single crewman.

He carried the number 96, said Felton, because nobody else wanted it. “Most drivers don’t like that number. It’s the only one that reads the same when the car is upside down,” he said, grinning like the cat that might just eat the canary. “I didn’t know the difference. Nothing too much rattled me at the time.” Felton made his mark in major endurance races with victories in the Daytona 24-hour and the Sebring 12-hour races in 1984, when he co-drove a Camaro with two-time Winston Cup champion Terry Labonte and Billy Hagan. Felton first began racing with Hagan in the Camaros prepared by stellar NASCAR crew chief Tex Powell in 1982 at the world’s greatest road race at Le Mans. 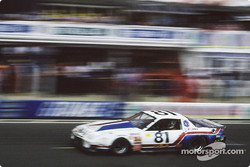 In France, Felton again got the job done with home-built attitude, piloting a short wheel-based pony car whose front end kissed the pavement and a rear that stuck up higher in the air than a French poodle’s coiffured tail — but only while standing still. At speed the Camaro hunkered down like a greyhound.

Fans at the great French 24-hour often pointed and waved with approval each time the potent American product flew past with so much roaring power it shimmied. (Believe me, I was there.) It was just the sort of test a man with Felton’s experience could relish. In his first appearance on the mammoth 8-mile circuit through the French countryside, Felton set a qualifying record before finishing second in the IMSA class due to mechanical problems.

“My memory of Le Mans is taking the kink at 215 miles per hour (on the old Mulsanne straight),” said Felton. “Hal Crocker was out there shooting photographs and he told me that I was putting the left front tire in the dirt at the exit. But that was just during qualifying. We broke the IMSA qualifying class record by so much we got called to the office. But we were deemed to be legal.”

Back in the states, his eventual total of 13 victories in the Camel GT coupled with his Kelly American Challenge record and eight victories in the Radial Challenge series aboard the racing version of the AMC Gremlin gave Felton a total of 46 victories, ranking him second behind Al Holbert in career IMSA victories. Only five drivers scored 40 or more career victories in the professional classes under the original IMSA sanction that concluded when Andy Evans bought the sanctioning body. In addition to Holbert (49 victories) and Felton, the others to reach that mark were Irv Hoerr (43), Peter Gregg (41) and Jim Downing (40), the latter also a guest of Road Atlanta during the Petit Le Mans weekend.

As for the SCCA Trans-Am, Felton scored a victory in his very first appearance in America’s oldest professional road racing series in 1983 at Moroso Park aboard a Pontiac Trans-Am. But in the fall of 1984, he suffered a fracture in his cervical spine in an accident at Riverside occasioned while avoiding Paul Newman’s Nissan, which was slowing to enter the pits under a just-issued red flag. Newman’s car was unscathed, but the heavy crash curtailed Felton’s professional career.

Felton’s love for racing never waivered. After recovering from what many concluded was an injury that would prevent him from racing again, Felton returned to road racing and then to his NASCAR racing roots.

The former Peach Bowl champion made a proud comeback to preparing and racing his own entries by launching the Historic Stock Car Series, a vintage organization for Winston Cup cars. At age 74, Felton continues to restore, prepare and race vintage stock cars in his shops in Roswell, Ga. At last year’s historic races at the Darlington Raceway, Felton blew away the competition on the legendary high-banked track, which was hardly surprising given the dedication of the iron man of the American road.

Jonathan Ingram can be reached at jonathan@jingrambooks.com.